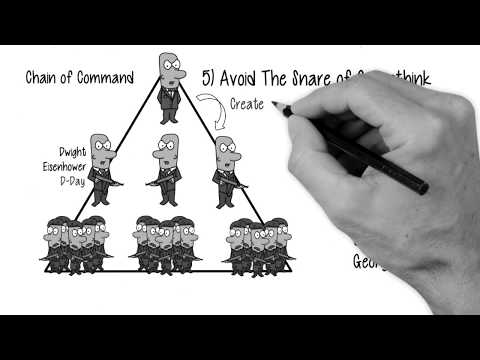 The 33 Strategies of War (Animated)

In Part V) Unconventional (Dirty) War, you'll learn about tactics to outsmart your opponent and win the war quickly. These tactics include weaving a seamless blend of fact and fiction, losing small battles to win the war, controlling the dynamic, taking small bites, creating a threatening presence, defeating the enemy in detail, exposing and attacking the enemy's soft flank, and seeming to work for the interests of others while furthering your own. Part III) Defensive Warfare teaches you to pick your battles, know your enemy, trade space for time, overwhelm resistance with speed and suddenness, segment your forces, pick your battles, and avoid the snare of groupthink. Part I) Self-Directed Warfare teaches you to declare war on your enemies, outsmart the opponent, transform your war into a crusade, and avoid the snare of groupthink. Part II) Organizational (Team) Warfare teaches you to avoid the snare of groupthink and know your enemy.